Just before Christmas we participated in an in depth interview with a researcher keen to find out more about entrepreneurship in the UK. We were happy to oblige, and we spent nearly two hours dissecting Fairypants and how we came to be where we are. We just got sent the transcript, and we thought you might like to have a read - but it's quite long, so we've serialised some of the questions for you!!

Interviewer        Hi, can you start by telling me your age, how long you have been in business, and what is it all about?


Fairypants     Yes, Fairypants. Don’t ask about where the name came from. It was completely random. I started off making clothes, and then I added things like handmade jewellery and hair accessories. And then I accidentally started making vegan cosmetics, and that’s kind of the main thing now.


Interviewer     Okay. So there has been a change during these six years?


Interviewer     So it’s turned from clothes to jewellery, and now you’re mainly focused on…?


Fairypants      Yes. The clothes was why it started, because I’d just graduated in 2008, obviously a very bad time to graduate, and I couldn’t get a graduate job. I’d been working in Superdrug while I was at uni, but I was applying for graduate jobs everywhere. Because it was 2008, people were cutting jobs so, you know, graduate jobs that I would have gone for, that I would have been good at, didn’t exist anymore so it was really difficult. So I ended up staying with Superdrug for another couple of years, but it wasn’t what I wanted to do.


So while I was there, I started making dresses just for myself because I’d never had as much money, as much disposable income as when I was a student. Because you get all the grants, you get all the loans, I was working 16 hours a week while I was a student, I had so much money. And when you’re a student, you live on appalling food and you go to pound a pint night, so you spend a few pounds on a night out. So I had all this money coming in and I wasn’t really spending that much, so I was buying a lot of clothes. And then I graduated working full-time in Superdrug on, you know, what was probably not much more than the minimum wage.

So I told my mum and she was like, I think you should start selling them. And then my nan told me to get a stall in Chester Market and start selling them. So I thought, all right, then! I got a stall in Chester Market selling the dresses and it… because I had this huge stall to fill, that’s why I started doing the jewellery and the accessories just because there was so much space on this stall. So they sold really well. At first it was mostly pity sales I think from my friends coming in to see me and buying them. But then the longer I stayed there, the more I got these regulars coming back to see me.

In Part 2 next week, I talk more about the beginnings of Fairypants, and our time in Chester Market! xox
Posted by Fairypants at 14:30 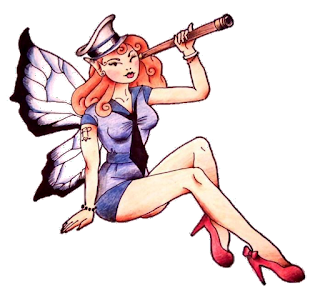